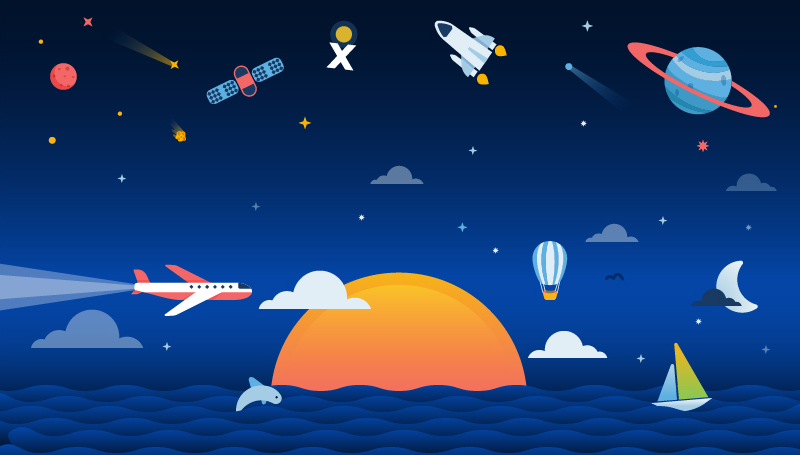 The engineers at Nextiva are continuously improving our business VoIP phone systems to keep our customers connected in the most advanced ways possible.
With that in mind, we were inspired to take a trip back in time to examine how telephone communications came to be what they are today.  Kick back and enjoy our “Evolution of the Telephone” timeline.

Our flashback begins with the world’s first telephone: the liquid transmitter. Two inventors, Alexander Graham Bell and Elisha Gray, both independently designed devices that could transmit speech electronically.
Bell reached the patent office mere hours before Gray, and won the famous battle over the invention of the telephone when his patent was passed on March 7, 1876.  The first words that were reportedly transmitted through the telephone receiver were “Mr. Watson, come here. I want to see you.” from Bell to his assistant, Thomas A. Watson.
By early 1877, the first official telephone lines were established as a part of Bell Telephone Company and the first regular telephone line was constructed between Boston and Somerville, Massachusetts.

The first telephone exchanges were performed by a switchboard throughout the late 1800’s and turn of the century.
Almon B. Strowger invented a telephone that could perform the first automatic telephone exchange and did not require an operator.
Although Strowger filed the first patent for a rotary dial phone in 1891, the dialing devices did not make their way into the Bell System until the 1920’s.

Leaping decades ahead, we found ourselves with touchtone dialing and the first cordless phones by 1970. A completely experimental picture-phone system was developed by AT&T to transmit images throughout a phone call.
Deemed too bulky and expensive, the idea was scrapped until later on being incorporated into a personal computer. The ‘80s brought about a revolution in telephony communications with the first testing of VoIP service, caller ID and the introduction of the mobile phone.

Although the term “smartphone” had not been coined at the time of its release, the IBM Simon is considered the groundbreaking device that first combined telephone and PDA features.
The cell phone craze had hit the ground running with consumers quickly discovering the benefits of being accessible while on-the-go.

The technology throughout this decade advanced exponentially. Mobile phones became more compact, offered high resolution screens and had more features than ever before.
VoIP technology expanded into businesses and applications, and text/voice/video software such as Skype allowed people to connect in even more ways.

With innovative device features such as the iPhone 4S’s Siri and Apple iOS 6’s Maps and Passbook, we are relying on our cell phones for more and more each day, and fewer people use a landline phone from their homes.
We can now use our cell phones book plane tickets, find directions to a business or residence, shop for shoes, see what’s new on Facebook, share photos with the world, check your favorite team’s score, play interactive games with friends, find out tomorrow’s weather report, and much, much more!