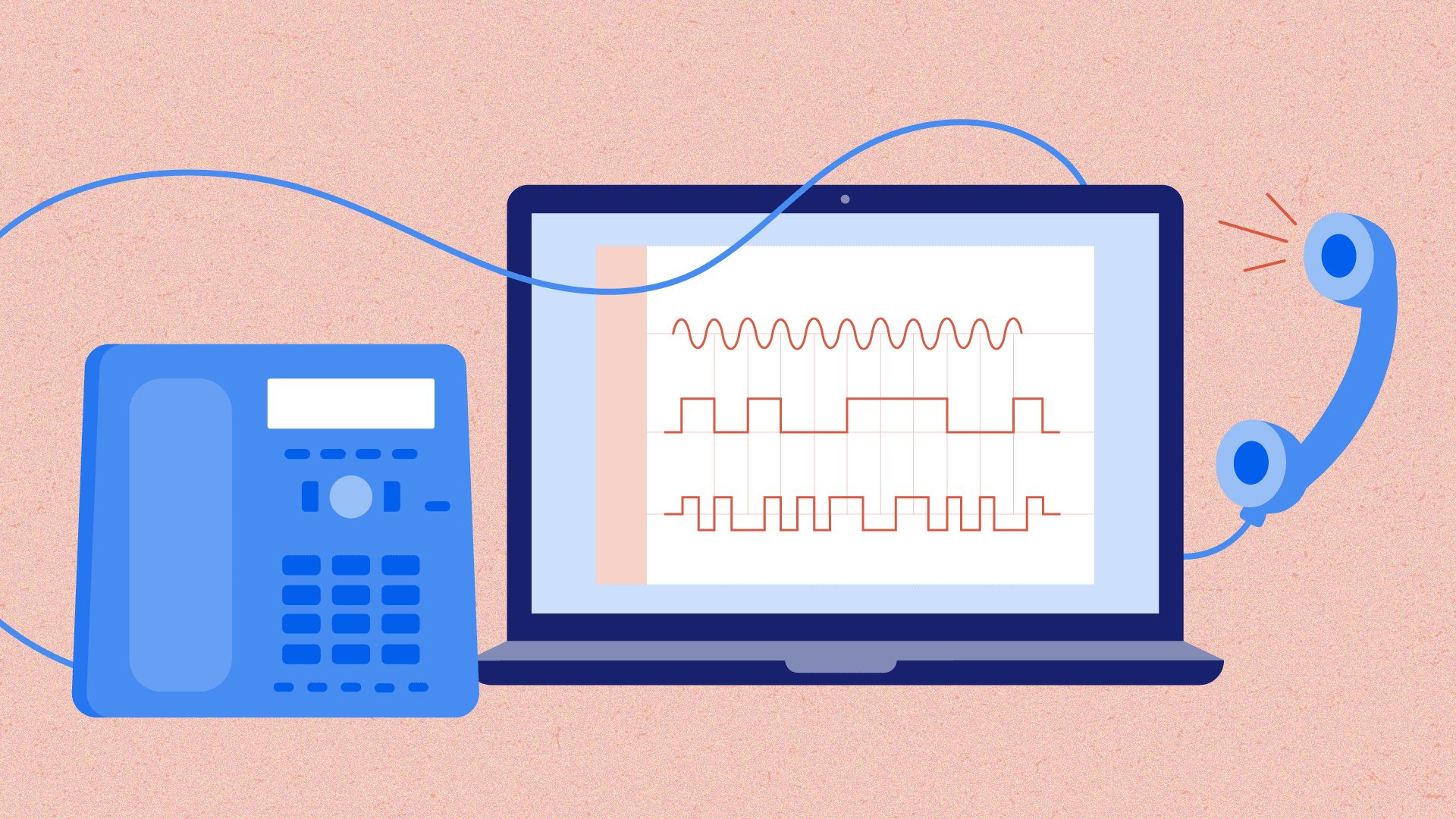 Thanks to Voice over Internet Protocol (VoIP), today’s phone calls are crystal-clear and only need an internet connection. It’s all possible because of VoIP codecs.
Read along as we discuss what a codec means, along with how you can select the right codec for your company’s VoIP phone system.

What are VoIP codecs?

A VoIP codec is a technology that determines the audio quality, bandwidth, and compression of Voice over Internet Protocol (VoIP) phone calls. VoIP codecs use either proprietary or open-source algorithms.
The word codec is a portmanteau of two terms: Compression and Decompression.
Codecs are the reason why you can download a movie in minutes, not hours. Practical examples of codecs include image capture (JPEG), encryption software (AES), streaming media (H.264), and music and audio recording software (MP3). For instance, codecs determine the quality and bandwidth you need to watch videos on YouTube or Netflix.
In the case of a VoIP codec, it converts analog voice signals into digital packets or a compressed digital form for transmission and then back into an uncompressed audio signal. VoIP codecs determine the call quality and latency in a conversation since the call takes place through the internet.
You might encounter some VoIP problems since calls travel over the internet. If your VoIP provider has multiple data centers, reliability is a non-issue for a vast majority of phone calls.
The success of a codec depends on its compatibility with different devices.
VoIP codecs all share one purpose. That is, they compress data and move it quickly. Business VoIP applications ensure phone calls don’t hog a ton of bandwidth and that calls are clear and crisp.
Voice over IP devices convert audio signals into digitized packets and transmits them through the Local Area Network (LAN). To prioritize these data packets, you might want to enable Quality of Service (QoS). This feature allows VoIP data to take priority over less critical traffic. As a result, QoS assists VoIP codecs in maintaining superior call quality.
The only notable difference between the different VoIP codecs is the way they compress the audio. Compression is necessary for transmitting audio since it requires a lot of bandwidth, which is finite. Files and documents will take a lot of space in the absence of compression, proving to be troublesome for organizations.
Business owners should think about their VoIP codec protocols to ensure the compression is efficient and requires less bandwidth.
These precautions will help organizations maximize their capacity planning, reduce expenses, and ensure a safer long-term investment for the company.
Cloud VoIP phone systems can be particularly useful for remote teams. It helps employees stay connected by making on-the-go video conferencing, call recording, and long-distance calling possible.

The fundamentals of audio quality

A reliable VoIP system has become essential to millions of companies today. The foundation of excellent business communication is fidelity – it’s why audio quality over the phone is a big deal.
But before we discuss audio processing in more detail, you should be aware of the common terminology related to audio quality.

No matter how exceptional a sound you have, it will sound bad on the other end if you have a low bitrate. The same is true for sample rates.
In short, bandwidth is your bottleneck. VoIP codecs aim to conserve bandwidth while maintaining impressive sound quality.

You might have noticed how the sound differs when you’re on the phone instead of speaking to someone face-to-face. This difference is noticeable because the phone doesn’t pick up all of the frequencies that the human voice hits.
The range of human speech is between 80 to 14,000 Hz. The lower the frequency, the deeper the sound. A punchy beat in a pop song consists of lower frequencies. On the other end of the spectrum, vocalists are renowned for their 250 to 1500 Hz.
Phone conversations are different, though.
Phone audio typically involves two bands: narrowband and wideband. Narrowband covers audio frequencies ranging between 300 Hz and 3400 Hz. For audio between 50 Hz to 7000 Hz, those are considered wideband.


However, when you talk in wideband audio, also known as HD Voice, you’ll be able to hear an expanded range of pitches, most closely resembling an in-person conversation.
This improvement is because wideband improves the sampled and transmitted audio spectrum, making the audio sound better.
Here’s another example to consider. Automotive manufacturers engineer a vehicle’s exhaust system for optimal acoustics. Luxury sports cars are stealthy because of the silencing effect of high frequencies canceling out lower frequencies.
VoIP codecs adopt a similar approach to minimize background noise for even better sounding phone conversations.
Better call quality is just the start.
Take care of your phone system once and for all.
See It

As there are plenty of codec choices, choosing a specific one can be tricky. Below, we’ve listed a few individual codecs to consider.

The International Telecommunication Union (ITU) introduced the G.711 codec back in 1972 for telephony use. This codec has two variants: μ-law and A-law. The United States and Japan use μ-law. Europe uses A-law.
This codec can squeeze 16-bit samples into 8 bits through logarithmic compression. As a result, the compression ratio becomes 1:2. The bitrate for both directions is 128 kbit/s (64 kbit/s for a single path), which is a lot.
While you get superior sound quality, the bandwidth requirement is relatively high. Plus, this codec doesn’t support multiple phone calls as adequately as other codecs like the G.729.
You can use the G.711 codec for all kinds of VoIP applications as there aren’t any licensing fees. There is also no digital compression, which is why it’s considered the best VoIP codec to interface with the public switched telephone network (PSTN).

G.722 is a high-definition codec, which means it’s wideband. ITU approved this codec in 1988, and since the patent has expired now, it’s free to use for everyone.
This codec helps improve speech quality without perceivable latency. HD voice has double the sample rate of G.711 at 16 bits. The transmission rate remains the same at 64 kbit/s.

If you’re looking for a codec with low bandwidth requirements and acceptable audio quality, the G.729 is a good bet.
The codec encodes the audio in frames. Each frame is ten milliseconds long and contains 80 audio samples. The bitrate for one direction of this non-HD codec is 8kbit/s. Since the compression is higher, you’re able to make more calls from your network at once.
That said, a few VoIP providers may not support the G.729 codec. Music and other non-verbal audio can sound choppy.

Cloud VoIP providers determine which codecs are available for your hardware.
VoIP providers transmit the data packets, while IP phones need to compress and decompress the audio effectively. The caller and the called phones negotiate the proper codec whenever there is a call connection attempt. Both the caller and receiver phones have a prioritized list to agree on the right codec.
When it comes time to select the best codec for your phone system, opt for the one that works. Think about your team’s real-world bandwidth capabilities and call volumes.
If you prefer better call quality, you should place the codec G.722 first and then G.711. But if lower bandwidth is your concern, set G.729 above G.711.
Since almost all VoIP phones and providers accept G.711, the codec G.722 is more limited. IT professionals prefer the G.722 codec for high-grade voice conversations without placing a significant burden on the local area network.

VoIP systems enhance your productivity by assuring seamless communication between your team members and customers. Voice over IP codecs make it possible to speak clearly without the complexity of bulky telecom equipment.
Avoid the stress of trying to wrap your head around the technical details of VoIP codecs. When you select a cloud phone system leader like Nextiva, you leverage its expertise from the start.
At Nextiva, we know clear call audio is essential to your business and your customers, which is why we listed 10 ways to improve your call quality while using the Nextiva App. Check out our support blog for general and Nextiva-specific tips.