San Francisco area code is within reach for any business with Nextiva VoIP services. 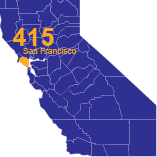 San Francisco originally grew to prominence during the California Gold Rush in 1848 and 1849. The city was incorporated in 1850 after California gained statehood, and is named after St. Francis of Assisi. Wells Fargo was founded in 1852 and the Port of San Francisco was established, firmly entrenching the city as one of the powerhouses of the state.

San Francisco had such a strong economy that it continued to thrive through the Great Depression and played an important role afterward during World War II. In the second half of the 20th century, the city became a cultural hub and the population continued to grow. This occurred alongside the rise of the internet in San Francisco, including the dot-com boom in the 1990’s and the second social media boom in the early 2000’s. Now, San Francisco is the 4th largest city in California and the 13th largest in the United States.

San Francisco is home to the headquarters of seven Fortune 500 companies, and seven more that made the Fortune 1000 list. They are McKesson, a healthcare company that came in at #6, Wells Fargo, Visa, PG&E Corp., Gap, Salesforce.com and Charles Schwab. The seven businesses that made the Fortune 1000 roundup include Williams-Sonoma, Levi Strauss, First Republic Bank, Prologis, a real estate investment company, Digital Realty Trust, Twitter, and Square.

Tourism is one of the main pillars of San Francisco’s economy, along with service, finance, government, education, and healthcare. Nearby Silicon Valley is the tech capital of the country and has helped the technology industry grow in the San Francisco area code as well. Some of the biggest employers in area code 415 are the San Francisco City Government, the University of California - San Francisco, California Pacific Medical Center, Wells Fargo, Salesforce, and Uber.

San Francisco has a strong economy. The city is expecting job growth of over 44% in the next decade and has an unemployment rate of only 3.5%. Over 40% of the population in the San Francisco area code makes over $100,000 annually, which in turn boosts the average household income in the city to $78,000. The three main occupations for residents in area code 415 are professional, scientific, technical services, health care and social assistance, and retail trade.

In 2017 San Francisco was ranked #1 On the Forbes list of “America’s Coolest Cities.” The city also received the honor of being named #7 by the same publication on the 2009 list of the “World’s Happiest Cities.” Some of the best annual events that take place in area code 415 are the San Francisco International Film Festival, the Pride Parade & Festival, and the Cherry Blossom Festival.

Explosive growth in California can happen for any business with a San Francisco area code. Get started with area code 415 from Nextiva and discover how a small step can have such a big impact. The Nextiva digital phone systems require zero extra equipment so you can get connected today. First, choose the phone number you want or simply roll the area code onto your existing business phone. Then, answer calls to the local San Francisco number from offices anywhere in the world.

Nextiva VoIP services are designed to help you run your business better. That’s why your San Francisco area code also comes with free PBX services as well. Get call recording, voicemail to email services, conference calls, and even the Nextiva Auto Attendant. The prerecorded system ensures that your customers get to the right extension every time, while also giving a professional impression to every caller. If that’s not enough, you can also explore additional features, like Nextiva Analytics, to help you get a more in-depth understanding of your customer base.

Nextiva is also dedicated to keeping you in control. Because of that, the NextOS software was developed with you in mind. Organize all of your users, features, and billing in one place, and have the freedom to access it from around the world. Location independence has never been easier with Nextiva.

Once you see the results form your San Francisco area code, you’ll be ready to grow. Expanding with Nextiva is as simple as choosing the area codes you need, when you need them. The flexible upgrade system never locks you into one package, and the fair pricing and “no hidden fee guarantee” both make Nextiva one of the most affordable VoIP services on the market today.

Finally, experience the true Nextiva difference with our Amazing Service. The 100% in-house customer service department is on-call seven days a week to keep your VoIP services running smoothly. Rest easy knowing that even on the weekends the customer support team will be here to troubleshoot anything you need.

Joining the Nextiva family means so much more than just connecting to a San Francisco area code. Your business will also get access to responsive customer support, powerful PBX features, the exclusive NextOS software, and amazing prices to top it all off.