Grow your business in Texas with a Plano area code. 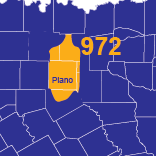 Plano is the 9th largest city in Texas. It has a population of 269,000 people and covers 71 square miles in the northeastern part of the state. Located in Collin and Denton Counties, area code 972 also extends into Dallas and the cities of Frisco, Allen, Cedar Hill, Garland and Irving among others. The city of Plano sits just 20 miles from Dallas, 50 miles from Fort Worth, and 215 miles from the capital city of Austin.

Although the city of Plano was originally settled in 1840 and incorporated in 1873, it didn’t experience a true population boom until the 1970’s. The University of Texas at Dallas was established in 1969 and farming began to be phased out as the main source of income in Plano. Many major corporations began to move into the city because of its proximity to the Dallas-Fort Worth metropolitan area, and the population increased quickly. Now the city boasts a strong and varied economy, and Plano sits as the 9th biggest city in Texas and 69th largest in the United States.

The 972
area code is the places to be

The Plano area code enjoys an unemployment rate of only 3.5%, which is significantly lower than the US national average of 5.2%, and is expecting job growth of over 42% throughout the next decade. The three most popular occupations for residents of area code 972 are professional, scientific, technical services, retail trade, and finance and insurance. The average household income in the United States is $53,000, but Plano comes in much higher with an average of almost $84,000 annually. Additionally, over 41% of the population is making over $100,000 every year.

Forbes chose Plano as the #1 “Best City for Finding a Job in 2016,” and the same publication listed it as one of their “Best 25 Suburbs for Retirement in 2015” as well. The Plano area code is worth visiting for many different annual events like the Plano ArtFest, Texas Music Revolution, and the Plano Balloon Festival.

If your business is ready to grow in Texas, you don’t need to hire a new team or open a second location. Instead, try Nextiva VoIP services to connect to the Plano area code. Tap into the local economy and get instant activation on area code 972 with only one call. Nextiva digital phone systems don’t require any extra equipment so all you have to do it choose your number to get started. Then, you can answer calls to the local Plano area code on smartphones or computers anywhere in the world.

Every Nextiva package also comes with the software and tools you need to run your business better. Start with the powerful PBX features like voicemail to email services, call recording, and conference call capabilities. Then, upgrade from a receptionist with the Nextiva Auto Attendant. The prerecorded software will save your business time and money while efficiently getting your customers to the correct extensions. You can also explore an array of add-on features, like Nextiva Analytics, to help you get a more in-depth understanding of your customer base. Finally, stay in control with the NextOS system. This easy to use software keeps all of your callers, users, features, and billing in one play so you can stay organized no matter where in the world you’re working from.

When you’re ready to grow, rest easy knowing that Nextiva is by your side. Nextiva knows that no two businesses are alike and won’t treat them all the same. Instead of being locked into tiered packages, your business can expand with ease because the flexible upgrade system means you can buy the area codes you want, when you want them. Start with area code 972, then expand across the country. The affordable pricing keeps options open for businesses with any budget, and the “no hidden fees” guarantee means that you’ll never pay any extra charges.

Clients across the country are recommending Nextiva because of the amazing customer service. The 100% in-house department is on-call seven days a week to make sure your Plano area code is always up and running. Whether you have questions, concerns, or need troubleshooting services from the experts, the team will walk you through every issue until it’s resolved to your satisfaction.

A Plano area code is within reach for any business with the affordable prices from Nextiva. Choose Nextiva for your VoIP services and you’ll enjoy powerful PBX features, easy-to-use software, flexible upgrades, and responsive customer services along with every area code you buy.

So, what are you waiting for? Expanding in Texas no longer has to just be a dream. Instead, make your business growth a reality with area code 972 and call Nextiva for instant activation on your digital phone system today!