Lincoln, Nebraska is in the 402 area code in Lancaster County, Nebraska. 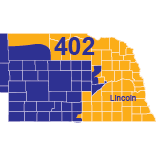 If your business is interested in expanding in Nebraska, a Lincoln area code can help. Just contact Nextiva to begin your growth with area code 402 today!

A Lincoln area code will connect your business to the capital city of Nebraska, and the second biggest city in the state. Lincoln covers 93 square miles and has an estimated population of 280,000 people. The city is located in the eastern part of the state and is the seat of Lancaster County. Area code 402 covers almost the entire eastern half of Nebraska and is also home to the cities of Omaha, Norfolk, Bellevue, Columbus, and more. Lincoln is an important city in Nebraska because of its convenient location 60 miles from Omaha, 195 miles to Kansas City, Missouri, and 190 miles to Des Moines, Iowa.

The city of Lincoln, Nebraska was founded in 1856 and incorporated in 1869. Some of the first settlers were attracted to the town to work in salt mines, however, the economy soon changed to farming the flat plains. They were hit hard by the Great Depression, but the population soon bounced back as German and Russian immigrants continued to move to the city and the nearby towns were annexed to meet the housing and infrastructure demands.

With the arrival of the railroad in Lincoln, the city became a transport hub in Nebraska and later an air travel hub as well with the Lincoln Air Force Base during World War II. In the 1990’s Lincoln experienced another population surge, and now the city sits comfortably as the 71st biggest in the US.

The Lincoln area code doesn’t have any Fortune 500 companies, but it does host one on the Fortune 1000 list. Amica Mutual Insurance is a company with a focus on auto insurance and ranked #834 on the most recent 2017 list. Other big industries in Lincoln are manufacturing and service, and there are also sectors of the economy focused on banking, finance, tech, education, railroads, and more. Their diverse economy has contributed to the city’s extremely low unemployment rate of only 2.1%.

The biggest employer in area code 402 is the State of Nebraska with over 9,000 employees. The other companies rounding out the top five list are Lincoln Public Schools, the University of Nebraska-Lincoln, Bryan Health, and the US Government.

The unemployment rate in Lincoln in much lower than the national average. It’s reported between 2% and 3% by different publications, while the US average in 5.2%. Additionally, over the next ten years the city is expecting job growth of around 37%. The average household income in the Lincoln area code is $50,000, which comes in close to the US national average of $53,000 per household. Almost 19% of the population in area code 402 makes over $100,000 a year, and the top three occupations for residents in the city are health care and social assistance, educational services, and retail trade.

Lincoln was named as one of Forbes “Best Places to Retire” in 2017, and the same publication also listed it on their roundups of “America’s Safest Cities” and “Cities with the Lowest Unemployment Rates.” Annual events in the Lincoln area code include the Lincoln Marathon and the Sip Nebraska Wine and Craft Beer Festival among many others.

If your business is considering expanding into Nebraska, a Lincoln area code is a great place to start. Instead of hiring a new team or building another office, you can tap into the local economy by adding area code 402 to your business number. With Nextiva VoIP services, you can answer calls to the Lincoln area code on your tablet, smartphone, or desktop computer from anywhere in the world.

Each Nextiva digital phone system also comes with pre-packaged and powerful PBX features. Run your business better with voicemail to email services, call recording, and conference call capabilities. If you’re a small business looking to give off a professional impression, a medium sized business trying to save money, or a big business focused on staying organized, the Nextiva Auto Attendant software is also included to help you reach that goal. The pre-recorded system comes with each Nextiva package and will simplify your customers’ calls by pointing them to the right extension, every time.

That’s not all, though. When you purchase area code 402 for your business, you also get access to the exclusive NextOS software. The easy to use system organizes all of your users, features, and even your billing in one place. This lets you stay in control of your calls because you can access it from anywhere in the world!

When you’re ready to grow your business beyond the Lincoln area code, Nextiva will be by your side. The flexible upgrade system means that you can add new number and extensions any time you need them. Additionally, the affordable pricing and “no hidden fees” guarantee ensure that every business owner can rest easy knowing that there will never be an extra charge on the bill.

Finally, Nextiva digital phone systems are the right choice for your Lincoln area code because of the Amazing Service from the customer support team. The department is on-call seven days a week to troubleshoot your problems, answer your questions, and personally walk you through any issue that you have with your VoIP services.

Are you ready to grow your business in Nebraska, and tap into the local economy of the state? If so, call Nextiva to get instant activation on a Lincoln area code. You’ll get started with powerful PBX features, easy to use software, affordable pricing, and exemplary customer service. Call today!