Irving, Texas is in the 972 area code in Dallas County, Texas. 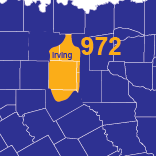 Is your business ready to expand in the Irving area code? If so, purchase area code 972 from Nextiva today to get started!

Nextiva VoIP services can connect you to the Irving area code. The city is located in the northeastern part of Texas and is the 13th largest in the state. Irving, Texas has an estimated population of 238,000 people and covers 67 square miles in Dallas County. Irving is an important city in Texas not only because of its size, but also because it conveniently sits 10 miles from Dallas, 204 miles from Austin, and 250 miles from Houston.

The city of Irving, Texas was founded in 1903 and incorporated in 1914, and was named after the famous American author Washington Irving.

The population growth was originally slow, but finally began to take off in the 1930’s when manufacturing plants, retail, and businesses began to open in the area. Between 1940 and 1960 the population grew from about 1,000 people to 45,000 people in the Irving area code.

In the 70’s the Texas Stadium and Dallas-Fort Worth Regional Airport began operating, and the city continued to grow. Now it sits as the 13th largest in Texas, and the 93rd in the United States.

Area code 972 in Irving, Texas contains five Fortune 500 companies and four Fortune 1000 companies. The Fortune 500 companies are ExxonMobil, listed at #4 in 2017, Fluor, a multinational engineering and construction firm, Kimberly-Clark, a personal care corporation, Celanese, a global tech and specialty materials company, and Michaels Cos., the arts and crafts retail chain.

The Fortune 1000 companies include Commercial Metals, Flowserve, Pioneer Natural Resources, and Darling Ingredients. The Irving - Las Colinas Chamber of Commerce reports that the Irving area code is home to over 8,500 local and multinational companies and boasts that it is the most diverse zip code.

The unemployment rate is exceptionally low in area code 972. It was reported at 3.6%, which is far below the US national average of 5.2%. Job growth in the Irving area code is projected to be almost 43% over the next ten years.

The average household income in Irving is $51,000, which is close to the US national average os $53,000. 20% of residents make $100,000 or more every year, and the three most common occupations in the city are retail trade, professional, scientific, technical services, and accommodation, food services.

Forbes ranked Irving at #5 on their list of the “12 Hardest Working Cities in the US” and in 2015 chose them as the #1 “Best City for Starting a Career.” In 2010, the same publication chose the Dallas-Plano-Irving area as one of the “Best Big Cities for Jobs.”

Now your business can get access to the Irving area code without moving offices or hiring a new team. Instead, use Nextiva VoIP services to purchase area code 972 for your company. Zero extra equipment is needed, so all you need to do is choose the phone number you want and you can get started today. Or, you can use the Nextiva rollover services to combine the Irving area code with your current business number.

Every Nextiva package also comes with powerful PBX features to help you run your business better. Get voicemail to email services, conference call capabilities, and even call recording with every area code that you buy. Your phone number also comes with the Nextiva Auto Attendant. This pre-recorded software saves both time and money for your business by eliminating the need for a receptionist and pointing your customers to the right extension every time.

The Nextiva Auto Attendant has the additional perk of giving off a professional impression to every customer, no matter how big or small your business is. You can also explore an array of add-on features for your digital phone system, like the Nextiva Analytics, which give you unprecedented insight into your callers and help you get an in-depth understanding of your customer base.

Additionally, the Nextiva VoIP services also come with NextOS software. This easy to use system lets you stay in control no matter where in the world you are located. Use it to answer calls to area code 972 on your smartphone, tablet, and desktop computer, as well as manage your users, billing, and features all in one place.

The software is also convenient when your business is ready to expand. If you want to grow with Nextiva, the flexible upgrade system makes it easier than ever. Add on the area codes and extensions you need, only when you need them. You can rely on the affordable prices and “no hidden fees” guarantee, and rest assured that you’ll never find any extra charges on your Nextiva bill.

One final reason to choose Nextiva is for of the Amazing Service the customer support team provides. Everyone who purchases an Irving area code also gets access to the 100% in-house services seven days a week. 95% of the time the department answers calls on the second ring, because they know your time is valuable. Contact them for questions, troubleshooting, or any other issues you experience with your digital phone system, and they'll walk you through the problem until it’s resolved.

If you’re ready to expand your business in the Irving area code, Nextiva is the solution that you need. The VoIP services offer affordable pricing, PBX features, easy to use software, flexible upgrade systems, and amazing customer support to every user. Call now to grow your business in Texas, purchase area code 972 for your business number, and use instant activation to get started today!