Indianapolis is the 317 area code, as the capital of the U.S. State of Indiana, in Marion County. 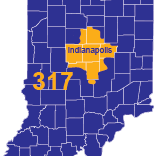 Are you considering an Indianapolis area code for your business? Purchase area code 317 from Nextiva to reach your target market!

An Indianapolis area code is now accessible from anywhere in the world with VoIP services. Use Nextiva to expand in area code 317, and your business will grow in the capital city of Indiana. Indianapolis has an estimated population of 855,000 people and covers 368 square miles.

The city is the biggest in Indiana, and is more than three times the size of Fort Wayne, the second largest in the state. Indianapolis is located in the center of Indiana in Marion County and sits 183 miles from Chicago, 112 miles from Cincinnati, and 243 miles from St. Louis.

The city of Indianapolis was founded in 1821. It quickly became an agricultural center in the Midwest because of its fertile farmland and the roads that connected it to other major cities in the area. The gas boom and railroads helped the population grow as they moved into the 1900’s, and Indianapolis soon had an automotive industry that rivaled Detroit.

Even when the gas and oil boom died down in the 1920’s, the city had a diverse economy with banking, insurance, manufacturing, and more to prop it up. Now, Indianapolis has grown to the 14th largest city in the United States.

The Indianapolis area code is home to three Fortune 500 companies and four Fortune 1000 companies. The Fortune 500 companies headquartered in the city are Anthem, a health insurance company, Eli Lilly, a global pharmaceutical company, and Simon Property Group, a real estate company with the largest real estate investment trust in the US. The four Fortune 1000 companies in area code 317 are Calumet Specialty Products Partners, hhgregg, Finish Line and Allison Transmission Holdings.

The 317 area code has a strong economy. Unemployment is at 4.6%, which is below the national average of 5.2%, and job growth is expected to be around 41% over the next ten years. The average household income in Indianapolis is $42,000, which is under the United States average of $53,000.

14.6% of the population makes over $100,000 a year, and the top three most common occupations for residents in the Indianapolis area code are health care and social assistance, retail trade, and manufacturing.

In 2017, Indianapolis was named “America’s Best City for Renters” by Forbes. The same publication also christened the city as one of “America’s Best Downtowns” in a 2011 list. Additionally, the city was recognized as having the best state government in the US in a 2017 list of “Best States” by US News and World Report.

Other notable events in area code 317 include the NASCAR Indianapolis 500 held every year in the city, the Indiana State Fair, and the CNO Financial Indianapolis Monumental Marathon.

An Indianapolis area code can be an asset to many businesses. Now you can access one without building new offices or hiring a new team. Instead, purchase area code 317 from Nextiva. The VoIP services provide instant activation for the area code so you can get started without any extra equipment. With Nextiva you can answer calls to area code 317 from anywhere in the world on your smartphone, tablet, or desktop computer.

Every Nextiva package also comes with additional features you don’t want to miss. Get call recording, conference call capabilities, and voicemail to email services for every phone number, along with the Nextiva Auto Attendant.

The Nextiva Auto Attendant uses pre-recorded software to eliminate the need for a receptionist and point your customers to the right extension. This not only saves your business time and money, but also gives off a professional impression to every customer who calls! Additional add-ons like the Nextiva Analytics can also be purchased at any time, and help you get a greater and more in-depth understanding of your callers.

If you’re new to using digital phone systems, don’t worry. Nextiva makes it easy with their exclusive NextOS software. The system lets you manage all of your features, users, and even your billing in one easy to access place. This lets you stay in control no matter where in the world your company is located.

When you’re ready to expand beyond your Indianapolis area code, Nextiva makes it easy with flexible upgrade systems. Get more extensions and area codes across the state or even the country, and only pay for what you need when you need it. The affordable billing and “no hidden fees” guarantee both ensure that there are never any extra charges and payments are always transparent.

Finally, rest easy knowing that Nextiva always has your back. The 100% in-house customer support team offers Amazing Service, seven days a week. You can call with questions, troubleshooting, or any other issues, and they’ll walk you through it until it’s resolved to your satisfaction. The team even answers 95% of calls on the second ring, because they know your time is valuable!

Working with Nextiva just makes sense when you need an Indianapolis area code. Add area code 317 to your existing business phone, or purchase a new number for your needs. Nextiva will help you grow with standard PBX features, easy to use software, instant activation, and flexible upgrades. You’ll also receive affordable billing and an amazing customer service team as an added bonus! So, what are you waiting for? Call Nextiva for your Indianapolis area code today!