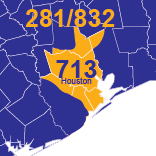 Now it’s possible to get a Houston area code for your business no matter where in the world you are located. Purchase area code 713, 281 and 832 from Nextiva today!

Every business should consider a Houston area code. Area code 713, 281 and 832 will give you access to not only the largest city in Texas, but also and fourth largest city in the United States. Houston has an estimated population of 2.3 million people and covers 627 square miles.

The city is located in Harris County and area code 713, 281 and 832 also includes the Chamber, Fort Bend, and Galveston counties among others. Houston is the largest city in the southern United States and sits 165 miles from Austin, 197 miles from San Antonio, 239 miles from Dallas.

The city of Houston was founded by the Allen brothers in 1836 and incorporated one year later. It’s named after General Sam Houston, who served as the president of the Republic of Texas. In the 1890s it became a central railroad hub for the state, and the port city experienced a population boon when oil was founded in 1901, quickly becoming the largest city in Texas.

World War II brought economic benefits to Houston, and by 1948 the had city doubled in size. Their diverse economy and strategic location on the Gulf of Mexico helped it become the 4th largest city in the United States, where it continues to sit comfortably today.

The Houston area code has a strong and diverse economy. The Texas Medical Center is the biggest concentration of research and medical institutions in the world, and the city is also renowned for their space industry. The Johnson Space Center, which contains NASA’s famed mission control center, is also located in the Houston city limits.

Additionally, the Houston area code is home to 17 more Fortune 1000 companies. Other major industries in the city include business, trade, transportation, manufacturing, tourism, and more.

The unemployment rate in the Houston area code is 4.9%, which is below the national average of 5.2%. The city is projected to have a future job growth of 36.7% over the next ten years.

Residents of Houston have an average household income of $46,000, which is slightly below the US average of $53,000, and just over 20% of the city makes more than $100,000 per year. The most common occupation for residents in the Houston area code is health care and social assistance, with retail trade and construction rounding out the top three.

Forbes has ranked the city of Houston on multiple lists in the past years. Recently, they were chosen as #1 on the list of “Best Cities for Manufacturing Jobs” in 2015. They also landed the top spot on the list of “America’s Coolest Cities” in 2012 and came in #2 on the Forbes 2014 roundup of “Top 10 Cities and States for Job Growth.”

Now you can expand your business in the Houston area code with VoIP services from Nextiva. Purchase area code 713, 281 and 832 for your business and get instant activation to begin using it today. Zero extra equipment is needed, and you can even roll the area codes onto your existing business number!

With Nextiva, every Houston area code comes with plenty of benefits. Each package includes powerful standard PBX features like call recording, voicemail to email services, and even conference call capabilities. Additionally, use the Nextiva Auto Attendant software to give a professional impression to every caller. The automated recordings take the place of a receptionist and save your business time and money by pointing your customers to the right extension, every time.

If you’re new to digital phone systems, don’t worry. The exclusive NextOS software from Nextiva makes managing your Houston area code easier than ever. Stay in control and access your users, features, and billing all in one place, from anywhere in the world. Run your business in Houston and answer calls to area code 713, 281 and 832 from your smartphone, tablet, or even a desktop computer!

VoIP services can help your business grow in the Houston area code, but don't stop there. When you’re ready to expand, do it with Nextiva by your side. The flexible upgrade system means that no matter how many extensions or area codes you need, you only have to pay for what you want, when you want it. Affordable billing and the “no hidden fees” guarantee also ensure that businesses of every size can use the Nextiva digital phone systems, and you will never find extra charges on your bill.

Finally, every Nextiva package also includes access to the Amazing Service customer support team seven days a week. The 100% in-house department is here to make sure all of your questions and problems are solved to your satisfaction. Your call will even be answered by the second ring 95% of the time, because they know your time is valuable!

So, what are you waiting for? Growing a business in any area code is possible with Nextiva VoIP services. Purchase area code 713, 281 and 832 today and get PBX features, easy to use software, affordable billing, and amazing customer support for your Houston area code!