The City and County of Denver is in the 303, 719 and 720 area codes, as the capital and most populous city within the State of Colorado. 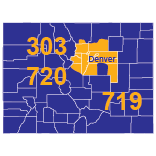 Nextiva VoIP services give help business connect to the Denver area code no matter where in the world you are located. Access the capital city of Colorado and expand your company with a digital phone system. Denver has an estimated population of 693,000 people, making it the 19th most populous state in the country, and it covers over 150 square miles.

Denver is located in the central part of Colorado and is the biggest city in the state. Area code 303 and 720 also cover the nearby cities of Boulder, Littleton, Lakewood, Aurora, and more. Denver’s strategic location gives it easy access to Fort Collins, which is 65 miles away, and Colorado Springs, which is only 70 miles away.

Denver, Colorado was founded in 1858 and incorporated in 1861. The city was named after James W. Denver, who was the governor of Kansas at the time. It served as a mining town for ten years before it was linked to the transcontinental railroad and the population began to boom in 1870.

The city attracted a variety of people, including immigrants, workers, and even millionaires. It experienced a slowdown during the Great Depression but has continued to grow as a portal to the west. Currently it site comfortably as the 19th largest city in the United States.

DaVita is the only Fortune 500 company that has their headquarters in Denver, and the health care company is one of the largest kidney care providers in the US. However, area code 303 and 720 also hosts four more Fortune 1000 companies. They are Molson Coors Brewing, WhiteWave Foods, Chipotle Mexican Grill, and MDC Holdings one of the top homebuilders in the nation.

The Denver area code is strategically located in between the large Midwest cities of Chicago and St. Louis and the west coast powerhouses like Los Angeles and San Francisco, making it a gateway to not just the west coast, but the midwest and southwest states as well. Other major players in the Denver area code include AIMCO, a business that manages apartment buildings throughout the country, the Gates Corporation, Frontier Airlines, the Newport Mining Company, and MapQuest, and more.

The current unemployment rate in the Denver area code is 3.8%, which is significantly lower than the US average of 5.2%. Projected job growth in the city is expected around 40% over the next ten years. The average household income in area code 303 and 720 is $52,000, which is almost equal to the national average of $53,000.

Over 23% of the population in Denver makes over $100,000 a year, and the top three most common occupations for residents in the city are health care and social assistance, professional, scientific, technical services, and accommodation, food services.

Denver has appeared on multiple lists published by Forbes throughout the years. In 2015 and 2016 they were ranked as the #1 “Best Place for Business and Careers.” They also were rated as the 10th “Coolest City in America” by Forbes in 2017. Annual events in the Denver area code include the International Sportsmen’s Exposition, the Bolder Boulder race, A Taste of Colorado, and the Great American Beer Festival.

If your business is ready to expand in Denver, you don’t need to hire a new team or build a new office. Instead, purchase area code 303 and 720 from Nextiva. Every package comes with instant activation, so all you need to do is choose the number you want or simply roll the Denver area code onto your existing business phone. Nextiva VoIP services require zero extra equipment, so you can answer calls to the local area code from your smartphone, tablet, or desktop computer no matter where in the world your business is located.

Each Nextiva digital phone system also comes with powerful standard PBX features that include everything you need to run and grow your company. Get call recording, conference call capabilities, and even voicemail to email services all free with your Denver area code. Additionally, utilize the Nextiva Auto Attendant software to save time and money for your business. Activate it on your number to eliminate the need for a receptionist and give a professional impression to every customer that calls your business.

When you purchase a Denver area code from Nextiva, you will also get access to the exclusive NextOS software. The system lets you manage your users, features, and billing all in one place so you can stay in control anywhere in the world.

Nextiva flexible upgrade systems also make expanding easier than ever. Add on more extensions and area codes across the state or even the country, and only pay for what you need, when you need it. Plus, you can count on affordable pricing and the no hidden fees guarantee, so you’ll never pay any hidden charges.

One of the best benefits to choosing Nextiva for your VoIP services is that the billing is always transparent and the customer service team is extremely responsive. The 100% in-house department is available seven days a week to troubleshoot your issues or answer any questions you may have about your Denver area code and digital phone system.

If you’re ready to tap into the local Colorado economy, purchase area code 303 and 720 for your business. Each package from Nextiva comes with affordable pricing, easy to use software, and instant activation so you can get started today! Grow your business with a Denver area code and expand across the country with ease, only with Nextiva by your side!