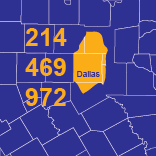 With Nextiva any business can add a Dallas area code to their number. Get VoIP services today and expand your business in area code 214, 469 and 972.

A Dallas area code is an asset to any business interested in growing in Texas. The city has an estimated population of 1.3 million people and covers 385 square miles. It is the 3rd biggest city in Texas and 9th largest in the United States. Area code 214, 469 and 972 includes Dallas along with other major counties like Collin, Ellis, Rockwall, Navarro and more. Dallas is located in the eastern part of the state and is 32 miles from Fort Worth, 196 miles from Austin, and 206 miles to Oklahoma City.

The city of Dallas was founded by John Neely Bryan in 1841 and incorporated in 1856. The Houston and Central Texas Railroad was built through the city in 1871 and brought a population boom to Dallas.

The discovery of oil and growth of the industry put the city on the map starting in 1931, and a tech boom in the 60’s and 70’s increased its importance in the country. The Dallas area code continued to prosper with the varied economy and still sits comfortably as one of the top ten biggest cities in the United States.

Although the city started as a farming and ranching economy, times have changed in the area. Some of the biggest industries in the Dallas area code now are oil and tech. The city hosts nine Fortune 500 companies, they are AT&T which came in at #9 on the list, Energy Transfer Equity, Tenet Healthcare, Southwest Airlines, Texas Instruments, Jacobs Engineering Group, HollyFrontier, Dean Foods, Builders FirstSource, and Vistra Energy.

Mary Kay Cosmetics, 7-Eleven, Chuck E Cheese, and Zale Corporation are other notable companies in the city. The biggest employer in the Dallas area code is Bank of America Corp., followed by Dallas ISD.

18% of the population is making over $100,000 annually, and the three most common occupations for residents of the Dallas area code are health care and social assistance, retail trade, and construction.

Whether your business works in oil, tech, finance, or any other industry, a Dallas area code will help you grow in the strong Texas economy. You don’t need to uproot your company or build a new office in the city. Instead, purchase area code 214, 469 and 972 for your business with Nextiva.

Every Dallas area code comes with instant activation, so all you need to do is choose the number you want to get started. If you’d like to use an existing business number, that’s also possible with the Nextiva rollover system. No extra equipment is needed, so you can begin any time, and answer calls local calls to your Dallas phone number from anywhere in the world on your tablet, desktop computer, or smartphone.

Every Nextiva digital phone system also comes with perks that help you run your business better. First, get powerful PBX features like voicemail to email services, conference call capabilities, and call recording. You will also get access to the Nextiva Auto Attendant. This specialized software eliminates the need for a receptionist and points your customers to the right extension through an automated phone system. Give off a professional impression to both customers and competitors with this software, and save time and money for your company!

When you purchase area code 214, 469 and 972 from Nextiva, you’ll also get access to the exclusive NextOS software. This software keeps you in control no matter where in the world you may be. Access your users, features, and even your billing all in one place with NextOS. Stay on top of your account and business no matter how many lines you have. You can even add on additional services like the Nextiva Analytics for a more in-depth understanding of your callers and customer base.

When you’re ready to expand, Nextiva makes it easier than ever. Add another Dallas area code or phone numbers from around the country, and only pay for what you want when you want it. The flexible upgrade system and affordable pricing mean growing with Nextiva is simple.

Finally, the Nextiva no-hidden-fee guarantee also means that you’ll never pay a hidden charge. Transparent billing and excellent customer service are staples of the company. Each Dallas area code comes with access to the customer support team seven days a week. No matter what questions or troubleshooting you need, Nextiva has your back. The customer service department will answer your call by the second ring 95% of the time, because they know your time is valuable.

If your business is ready to grow in Texas, area code 214, 496 and 972 can be a huge asset. All you need to do is call Nextiva, and you can get started with instant activation! Take advantage of affordable pricing, amazing customer service, and complete packages with all of the software and services you need to grow. What are you waiting for? Call Nextiva to get your Dallas area code today!