Columbus, Ohio is in the 614 area code in Franklin County, Ohio. 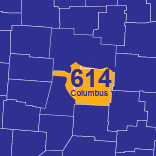 Columbus, Ohio is located in area code 614. You can use Nextiva VoIP services to purchase a local Columbus area code for your business.

There are many benefits to connecting area code 614 to your business number with Nextiva. Columbus is the capital of Ohio, and the biggest city in the state. It is centrally located in Franklin County, and area code 614 also encompasses the surrounding suburbs of Upper Arlington, Grove City, Hilliard, Dublin, and more.

With a Columbus area code from Nextiva, you will be able to tap into the local customer base in the city and access a population of around 850,000 people. Columbus covers 223 square miles and sits 100 miles from Cincinnati and 145 miles from Cleveland.

Columbus was founded in 1812, and specifically built to be the central capital city of the state of Ohio. It was named after Christopher Columbus and started out as only a sparsely populated forested area. In 1831 it was connected by roadway with the Ohio and Erie Canal and population began to grow.

During the civil war, the city served as a base for the Union Army and was also a central point on the Underground Railroad. The buggy and steel industries began to prosper in the city after the war, and it was able to weather the Great Depression better than most other Midwest cities. In World War II the jobs and population grew again, and by the 1990’s Columbus was firmly entrenched as Ohio’s largest city.

Columbus also has a notable food industry, with Wendy’s, Bob Evans, Max & Erma’s and White Castle headquarters located in the city. Additionally, the city boasts Ohio State University, which is one of the largest universities in the US and has over 66,000 students and 45,000 employees.

Columbus has a diverse economy with businesses in every industry, including the Battelle Memorial Institute, the largest private research and development foundation in the world, which focuses on non-profit work in the science and technology industries. Columbus also hosts the Chemical Abstracts Service which is the biggest clearinghouse of chemical information in the world, and NetJets, the largest a private air fleet in the world with over 700 jets.

Job growth in Columbus over the next ten years is expected at almost 40%. The average household income in area code 614 is $45,000, which is less than the US average of $53,000. The most common occupation for Columbus residents is health care and social assistance, followed by retail trade. Educational services round out the top three.

Columbus has received recognition from many different publications in the past ten years.

Forbes named Columbus the #1 “Up-and-Coming Tech City” in America in 2008 and chose it as one of the “Top Cities for Business” in 2013. Money Magazine also listed Columbus as one of their “6 Best Big Cities” in 2016 because of the cities highly educated workforce and excellent wage growth.

Some major events in the Columbus area code every year include The Arnold Sports Festival, the country’s largest multi-sport festival, the Memorial Golf Tournament hosting some of the PGA’s best golfers, and the Ohio State Fair.

If you want to tap into the local Ohio customer base in area code 614, Nextiva VoIP phone services are the solution. No matter where in the world you are located, a Nextiva phone number lets you get a local Columbus area code for your business that’s easily accessible by smartphone, desktop computer, or even a tablet.

Every Nextiva digital system comes with everything you need to get started. Plus, instant activation and zero extra equipment make it easier than ever. All you have to do is choose the phone number you want, or roll the area code onto your existing phone number, and you can become a part of the local market in Columbus.

Nextiva digital phone packages come with powerful standard PBX features like voicemail to email, call recording, conference calls, and more. The Auto Attendant also lets you set up an automated system to point your customers to the right extension, saving your business both time and money.

When you’re ready to expand, Nextiva makes it simple. Scaling your business is as easy as adding more extensions and area codes, and flexible system upgrades mean you can grow at your own pace with Nextiva by your side. When you’re ready, we even offer affordable add-ons like Nextiva Analytics, which integrate seamlessly into your system and give you valuable insight into your customer base.

Whether you want one Columbus area code or numbers across the state, all Nextiva VoIP services are affordable and come with our “no hidden fees” guarantee. What you see is what you pay, without any extra charges.

Nextiva digital phone systems are the clear choice for your area code 614 number. The NextOS software makes managing your users, exploring features, and even paying your bills easy because it’s all in one place. If you ever do have a question, our 100% in-house customer service team is on call every day of the week to walk you through any issues that you may have.

It’s simple, affordable, and easy to use. Get quality customer service, easy to access software, and PBX features only with Nextiva. A VoIP digital system is essential in helping your business branch out to new markets and retain new customers, so grow with a 614 area code on your number and Nextiva by your side.

What are you waiting for? Call Nextiva to activate your digital phone system today!