Juneau area code is essential for any business that is interested in growing in Alaska. 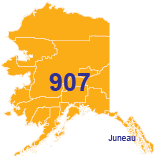 The city of Juneau is the capital of Alaska. It has an estimated population of 32,000 people and covers 2,700 square miles, making it the second largest city by size in the United States. Juneau is listed as a “unified municipality” in the Gastineau Channel in Alaska’s panhandle, and area code 907 also includes the rest of the state which has a population of almost 740,000 people. Juneau is unique because it’s only reachable by plane or boat, and it sits 850 miles from Anchorage.

The town of Juneau was the first in ALaska to be settled by Americans after the Alaska purchase. It started as a mining town in the 1880s and was incorporated in 1900. The capital city received its title in 1906 when it was moved from the town of Sitka.

Alaska was granted statehood in 1959, which led to a population growth in both the state and the city of Juneau. The Alaska Pipeline in 1977 also led to a small oil boom and another population increase for area code 907. Now, much of the city is sustained by tourism from cruise ships.

The state of Alaska isn’t home to any Fortune 500 or Fortune 1000 companies. Instead, the biggest industries in the Juneau area code are tourism and mining. The Juneau Economic Development Council stated that there are thousands of tourism jobs in the city providing both full-time and seasonal employment for the residents.

The largest employer in the Juneau area code is the Hecla Greens Creek Mining Company, which employs between 299 and 400 residents of the city. The Hecla Greens Creek Mining Co. is “one of the largest and lowest-cost primary silver mines in the world.” Other top employers and businesses in Juneau, Alaska, are Reach, Inc., “the one-stop location for information, referrals, supports and services for children, adults, and families experiencing developmental delays or disabilities in northern Southeast Alaska”, Fred Meyers Stores, Inc., a grocery and retail chain, Southeast Alaska Regional Health Co., and Wal-mart Associates, Inc.

The unemployment rate in Juneau is 4.7%, which is much lower than the US national average of 5.2%. Additionally, the city is expecting a 34% increase in job growth over the next ten years. The average household income in the Juneau area code is $84,000, which is significantly higher than the US national average of $53,000, and 38% of the population is making over $100,000 annually. The three most common occupations of residents in area code 907 are public administration, health care and social assistance, and retail trade.

In 2010 Juneau was listed on the KaBOOM! “Playful City USA” list because they make a targeted effort to provide great places for kids to play in throughout the city. The state of Alaska was also listed as #185 on the Forbes list of “America’s Best Employers,” and US News and World Report stated that “business publication Kiplinger listed Juneau earlier this week as the top small U.S. city with the highest concentration of households with at least $1 million.” Some annual events in the Juneau area code are the Golden North Salmon Derby, the Frank Maier Marathon, and Capital City Brewfest.

If you want to expand your business in Alaska, purchase a Juneau area code from Nextiva. It covers the entire state and will help you tap into the local economy of the “Last Frontier.” Now you don’t need to build a new office in the northern state or hire a new team. Instead, you can buy area code 907 and set up a VoIP system. The Nextiva digital phone system requires zero extra equipment so you can access your Juneau area code with instant activation today. With Nextiva, you can answer local calls from the city on your smartphone, tablet, or desktop computer from any location in the world.

Choosing Nextiva also gives you access to powerful standard PBX features to help you run your business better. Each Juneau area code also comes with call recording, voicemail to email services, and conference call capabilities. The Nextiva Auto Attendant software is also included free of charge. The pre-recorded system eliminates the need for a receptionist and saves time and money for your business by pointing your customers to the right extension every time. It also gives off a professional impression to every customer who calls.

Every Nextiva package also includes NextOS software. Stay in control of your business from offices around the world by managing your users, features, and even your billing all in one easy to access place. When it’s time to grow, Nextive makes it easy with the flexible upgrade system. Add on extensions and area codes from across the country with ease and only pay for what you want, when you want it. Businesses with budgets of any size can rest assured knowing that with the affordable pricing and “no hidden fees” guarantee billing is always transparent and you’ll never pay any hidden charges.

A final benefit to choosing Nextiva for your Juneau area code is the responsive customer service. The 100% in-house team is on call seven days a week to answer questions and troubleshoot any problems that arise. No matter what problem you may have, the customer support team will walk you through it step by step until it’s resolved.

Purchase area code 907 from Nextiva to grow your business in Alaska, and you’ll receive so much more than just a number. Every VoIP package also comes with powerful PBX features, exclusive NextOS software, transparent billing, and access to a responsive customer support team. So, what are you waiting for? Call Nextiva to get instant activation on your Juneau area code today!