If your business is ready to grow in California, a Stockton area code can help. 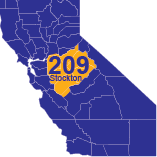 The city of Stockton is located in the central part of California. With an estimated population of 307,000 people, it is the 13th largest city in the state. The Stockton area code covers 64 square miles in San Joaquin County, and includes the Stanislaus, Amador, Mariposa, Calaveras, and Merced counties as well among others. Area code 209 sits on the San Joaquin River and is 47 miles from Sacramento, 77 miles from San Jose, and 78 miles from San Francisco.

Stockton was incorporated in 1850 and is named after Robert Field Stockton, a US Navy Commodore. People began to move to the Stockton area during the California Gold Rush and it received a wave of immigrants from China as well.

The city’s location on the water helped it become an important place for trade and transport, and in 1933 the Stockton Deepwater Channel was completed. Stockton continued to grow through World War II and now it is the 13th largest city in California and the 63rd biggest in the United States.

Some of the biggest industries in area code 209 are agriculture, trade, construction, and manufacturing and the city is home to the University of the Pacific, CSU Stanislaus, National University, and more. Unfortunately, the Stockton economy suffered during the housing market crash in 2008 and the city filed for bankruptcy in 2012 and is still recovering.

Due to their recent bankruptcy, the job market in Stockton is still struggling. The unemployment rate in area code 209 is 9%, which is significantly higher than the US national average of 5.2%. However, the city is expecting around 36% of future job growth in coming years.

The average household income in Stockton is $45,000, which is lower than the US national average of $53,000, and 18% of the population makes over $100,000 annually. The most common occupations for residents in the Stockton area code are health care and social assistance, retail trade, and educational services.

In 2015 and 2017, Stockton was named an “All-America City” by the National Civic League. Every year, some of the biggest and best events in the Stockton area code include the Stockmarket, the Concerts in the Park series, beer festivals, food festivals, and more.

Now your business can connect to the local economy in California with a Stockton area code. Get started with Nextiva VoIP services and area code 209 today. Instead of hiring a new team or opening a second location, simply roll area code 209 onto your existing business number for instant activation on your Nextiva digital phone system. Then, your business will have the freedom to answer calls to the local number from any internet connected device, anywhere in the world.

That’s not all, though. Your Nextiva package also comes with powerful standard PBX features to help you run your business better. Stay connected with your customers and keep your employees in the loop with call recording, conference call capabilities, and voicemail to email services. Then, take advantage of the free Nextiva Auto Attendant to save time and money for your business. The prerecorded software will efficiently get every caller to the right extension while also giving a professional impression to every customer. You can also explore additional features, like Nextiva Analytics, to get an in-depth look at your callers and a better understanding of your customer base.

Are you worried about growth management? Expanding your business in California is easy with Nextiva by your side. Use the NextOS software to organize all of your callers, users, features, and billing in one place, and stay in control with the ability to access it from anywhere in the world. Whether you need one Stockton area code or numbers across the country, enjoy the freedom to grow at your own pace with Nextiva flexible upgrades. Additionally, the affordable pricing and “no hidden fees” guarantee means you can budget with peace of mind knowing you’ll never find extra charges on your bill.

Best of all, when you work with Nextiva you come first. People matter here and the 100% in-house customer service team is dedicated to your success. Contact them seven days a week for troubleshooting and 95% of the time your call will be answered on the second ring because they know your time is valuable. Then, the customer support department will walk you through the solution step by step until every issue is resolved to your satisfaction.

If you’re looking for a Stockton area code, join the Nextiva family. Your Nextiva package will start with area code 209 but you’ll also get so much more than that. Enjoy extra PBX features to help you run your business, exclusive NextOS software to keep you in control, flexible upgrades and affordable pricing to grow at your own pace, and responsive customer service to ensure your digital phone system is running smoothly no matter what.

Explore all the possibilities that a Stockton area code can offer you, and then take the leap and experience the Nextiva difference for yourself.

So, what are you waiting for? Get started with Nextiva VoIP services and get instant activation on area code 209 today!