Nextiva VoIP services can connect your business to the Phoenix area code. 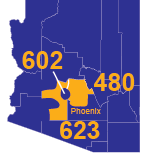 Phoenix is the capital city of Arizona and the largest city in the state. The Phoenix area code covers 518 square miles and has an estimated population of 1.6 million people, making it the 5th most populated city in the United States. It’s located in Maricopa County, so area code 602, 480 and 623 includes the neighborhoods of Glendale, Mesa, Peoria, Tempe, Anthem and many more. Phoenix is positioned in the central part of Arizona and is 113 miles from Tucson, 355 miles from San Diego, and 298 miles from Las Vegas.

Phoenix was incorporated in 1881 and became the state capital of Arizona in 1912. As railroads connected it to the rest of the country, Phoenix began to grow with the “5 C’s” of their economy: climate, copper, cotton, citrus, and cattle. Surprisingly, the city was a hub for farming and agriculture in their early years.

After Arizona achieved statehood the city experienced a major population growth, which continued through World War II. Multiple army and air force bases in the area helped the economy shift and diversify. Now, Phoenix is the largest capital city of any state in the country and the most populous city in Arizona.

Some of the biggest industries in area code 602, 480 and 623 are construction, government and defense, tourism, technology, and business services. The top five employers in the city are the State of Arizona, Wal-Mart Stores, Banner Health, the City of Phoenix, and Wells Fargo, while other notable companies in Phoenix include Bank of America, Arizona State University, JP Morgan Chase & Co. and Intel Group.

The Phoenix area code has an unemployment rate of 5.5%, which is slightly higher than the US national average of 5.2%. Additionally, the city is expecting 40% job growth over the next ten years. The average household income in Phoenix is $47,000, which is on par with the national average of $53,000. The top three occupations for residents in area code 602, 480 and 623 are health care and social assistance, retail trade, and accommodation, food services, and 19% of the population makes over $100,000 annually.

Expanding your business in Arizona should start with a Phoenix area code. With Nextiva, you can get instant activation on area code 602, 480 and 623 to begin today by choosing the business number you want or simply rolling the area codes onto your existing business phone. Then, you can answer calls to the local number from smartphones or computers anywhere in the world.

Along with the ability to be location independent, all Nextiva VoIP services come with extra features to help you run your business. Incorporate voicemail to email services, call recording, and conference calls into your daily routine, and serve your customers better with the Nextiva Auto Attendant. The prerecorded software quickly and efficiently gets your customers to the right extensions when they call, all while saving time and money for your business. For businesses ready to branch out, you can also explore plenty of add-on features, like Nextiva Analytics, to help you get an in-depth look at your callers and a better understanding of your customer base.

That’s not all, though. When you choose Nextiva for your Phoenix area code your business will also have access to the exclusive NextOS software. So, whether you buy area code 602, 480 and 623 or numbers across the country, you can stay organized and in-control with all of your users, features, and billing in one place.

Finally, when you’re ready to grow, Nextiva makes it simple. No two companies are the same, so you’ll never be locked into the same plan or package. Instead, take advantage of the Nextiva flexible upgrades and only buy the area codes you need, when you need them. Best of all, the affordable pricing ensure businesses with any budget can afford a Phoenix area code, and the “no hidden fee” guarantee means you’ll never pay any extra charges.

Customers are choosing Nextiva because the high-value packages come at an amazing price, and companies always feel supported by the Nextiva customer service team. The department offers Amazing Service seven days a week, and answers 95% of calls on the second ring because they know your time is valuable. Joining the Nextiva family comes with the peace of mind that your digital phone systems will always be running smoothly.

When your business is ready to grow in Arizona, come to Nextiva first. You no longer need to open a second location or hire a new team to tap into the local economy. Instead, purchase area code 602, 480 and 623 for your VoIP services.

Call Nextiva for instant activation on your Phoenix area code, and get started today!