Las Vegas, Nevada is in the 702 area code, in Clark County, with an estimated population of 558,383 as the 28th most populous city in the country. 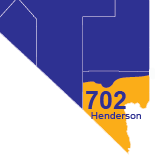 A Las Vegas area code can help businesses expand their reach in Nevada. Purchase area code 702 from Nextiva to get started today!

Las Vegas is the biggest city in the state of Nevada and the 28th largest in the country. It has an estimated population of almost 650,000 people and covers 135 square miles in the Mojave Desert. The Las Vegas area code is located in Clark County in southern Nevada.

Area code 702 also covers the cities of Henderson, Boulder City, Mountain Springs, and Primm among others. Las Vegas is strategically located near many major cities in the western US and is 265 miles from Los Angeles, California, 326 miles from San Diego California, and 300 miles from Phoenix, Arizona.

John C. Fremont settled the area that is now Las Vegas in 1844, and the city was officially founded in 1905 and incorporated in 1911. The city began to grow in 1931 when gambling was legalized and the first casinos were constructed. The Nellis Air Force Base was also founded in 1941 which helped boost economy throughout World War II. Las Vegas served as an atomic testing site in the 50’s as well.

In the 1960s, the gaming industry began to attract more to the city, and the hotel and hospitality industry began to expand in 2011 when millions of dollars were invested in the downtown Las Vegas strip. Now, Las Vegas continues to be one of the biggest casino destinations in the world and sits as the 28th largest city in the US.

The biggest employer in area code 702 is MGM Resorts International which provides over 55,000 jobs to residents in the city. The rest of the companies that round out the top five biggest employers are the Clark County School District, Caesars Entertainment, Nellis and Creech Air Force Base, and Wynn Resorts.

The unemployment rate in Las Vegas is 7.2%, which is higher than the US average of 5.2%. However, job growth in area code 702 is expected at almost 40% over the next ten years. The average household income in the Las Vegas area code is $51,000, which is almost the same as the national average of $53,000 per year. 19% of the population is making over $100,000 annually, and the three top occupations for residents in Las Vegas are accommodation, food services, retail trade, and health care and social assistance.

Las Vegas had the honor of being ranked #9 on the Forbes list of “America’s Most Dangerous Cities” in 2011. In lighter news, the University of Nevada Las Vegas was ranked first on the US News and World Report list of “Most Diverse Campuses in the Nation” in 2017. Some of the most popular events held every year in the Las Vegas area code are the Vegas Uncork’d food festival, the Great Vegas Festival of Beer, and the Electric Daisy Carnival (EDC) music festival.

Is your business ready to grow in Nevada? If so, it’s time to purchase a Las Vegas area code from Nextiva. Now you can answer local calls to your own business number with area code 702 from anywhere in the world with Nextiva VoIP services. The best part? The digital phone systems require zero extra equipment, have instant activation, and can be answered on your smartphone, laptop, desktop computer, or even a tablet from any location.

Nextiva makes it easy to manage your Las Vegas area code because each package also comes with powerful PBX features. These include call recording, conference calls, and voicemail to email services. You’ll also get access to the Nextiva Auto Attendant software completely free. The pre-recorded system automatically forwards callers to the right extension without the need for a receptionist. Not only will this save your business time and money, it also gives off a professional impression to every customer that calls. When you’re ready for more, you can also explore add ons like Nextiva Analytics, which provide an in-depth understanding of your customer base.

If you’re nervous about managing numbers in area code 702, don’t worry. The exclusive NextOS software lets you stay in control from anywhere in the world by organizing your billing, users, and features all in one easy to access place. The affordable pricing and transparent billing also mean that you’ll always understand your payments and never have hidden charges.

For companies that are ready to grow beyond the Las Vegas area code, Nextiva makes it easy with the flexible upgrade system. Simply pay for the area codes and extensions that you want, when you want them.

Finally, you can rest assured that Nextiva has your back. The customer support team strives to provide Amazing Service to every caller. The 100% in-house department is available seven days a week to troubleshoot your problems, answer your questions, and walk you through any issue step by step until it’s resolved to your satisfaction.

If you’re ready to expand into Nevada, you’ll need a Las Vegas area code on your number. Purchase area code 702 for your business and get instant activation, standard PBX features, easy to use software, affordable pricing, and responsive customer service with every package. So, what are you waiting for? Call Nextiva to get started today!