Irvine, California is in the 714 and 949 area codes in Orange County, California. 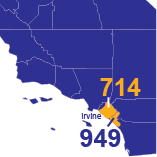 You can purchase an Irvine area code for your business with Nextiva. Just call today to get instant activation and reach the local California market with area code 714 and 949.

Irvine is the 15th largest city in California, and Nextiva VoIP services will connect you to the estimated population of 257,000 people there. The Irvine area code covers almost 66 square miles, and is located in Orange County in the southern part of the state.

Irvine began as the vast ranch lands of James Irvine. When his son inherited them he formed the Irvine Company, and that land eventually became the city of Irvine. The University of California, Irvine was built in 1959 on part of their land, and the Irvine Company created plans to build a town around the campus.

In 1971, the city of Irvine was officially incorporated. It continued to grow beyond the confines of a campus town, and in 1999, Irvine had a population of 134,000 people. Now the city is listed as the 15th largest in the state of California.

The Irvine area code is home to one Fortune 500 company. Western Digital is “an American computer data storage company and one of the largest computer hard disk drive manufacturers in the world.” Area code 714 and 949 also contains four Fortune 1000 companies. They are Edwards Lifesciences, a medical equipment company, HCP, a real estate investment trust, TRI Pointe Group, a construction company, and CoreLogic, an analytics and business intelligence company.

Other major employers in the Irvine area code are the University of California, Irvine with 16,000 employees, Broadcom, Parker Hannifin, the Irvine Company, and the Irvine Unified School District. The Irvine Chamber of Commerce states that they promote the city “as a dynamic business and tourism destination.” They also aim to represent “the interests of more than 800 member and partner businesses, serving nearly 100,000 employees.”

Job growth in the Irvine area code is projected to be 41% over the next ten years, and the current unemployment rate is 3.3%, which is significantly under the national average of 5.2%. The three biggest industries in Irvine are professional, scientific, technological services, manufacturing, and educational services. 46% of the residents make over $100,000 a year, and the average household income in the Irvine area code is $92,000, which is much higher than the US national average of $53,000 per year.

Forbes chose Irvine as #7 on their list of “Best and Worst Cities to Find a Job in 2016.” The University of California, Irvine was also ranked #21 on the list of “Best Law Schools” by US News and World Report. Some of the most popular annual events in area code 714 and 949 are the Irvine Global Village Festival and the Southern California Half Marathon.

If you’re ready to expand your business in California, purchase an Irvine area code from Nextiva. You no longer need to open offices or hire new teams to reach new markets. Instead, you can use the Nextiva VoIP services to answer local calls to area code 714 and 949 anywhere in the world on a tablet, smartphone, or desktop computer. With Nextiva, zero extra equipment is needed, so you can get instant activation for your number!

Every Nextiva package also includes an array of PBX features to help you run your business better. Get conference call capabilities, voicemail to email services, and call recording options with every area code that you buy.

Additionally, take advantage of the free Nextiva Auto Attendant software that’s included with your new Irvine number. The pre-recorded software gives a professional impression to every caller, no matter how big or small your business is, and saves you time and money by eliminating the need for a receptionist. As you grow, you can also explore additional features and add-ons, like Nextiva Analytics, which help you get a more in-depth understanding of your customer base.

One of the best benefits of choosing Nextiva for your digital phone systems is access to the exclusive NextOS software. The easy to access software lets you stay in control with all of your features, users, and billing in one place. No matter where in the world you are located, you can log in anytime to answer phone calls to area code 714 and 949 and stay in communication with your customers and your team.

For many businesses, growing in the Irvine area code is just the start. When it’s time to expand across the state of California or even the whole country, Nextiva is here to help. Purchase more extensions and area codes when you need them with the Nextiva flexible upgrade system. The affordable prices and “no hidden fees” guarantee also mean that Nextiva services are possible for businesses with any budget, and transparent billing ensures that you never pay any extra charges.

Finally, rest easy knowing that Nextiva has your back. The 100% in-house customer support team offers Amazing Service to every customer, seven days a week. Your calls will be answered on the second ring 95% of the time, and the department will personally walk you through any questions, issues, or troubleshooting that you need.

Are you ready to grow your business in the Irvine area code? If so, get started with Nextiva and purchase area code 714 and 949 for your company today! You’ll get instant activation, PBX features, amazing customer support and affordable billing for all of your VoIP needs.