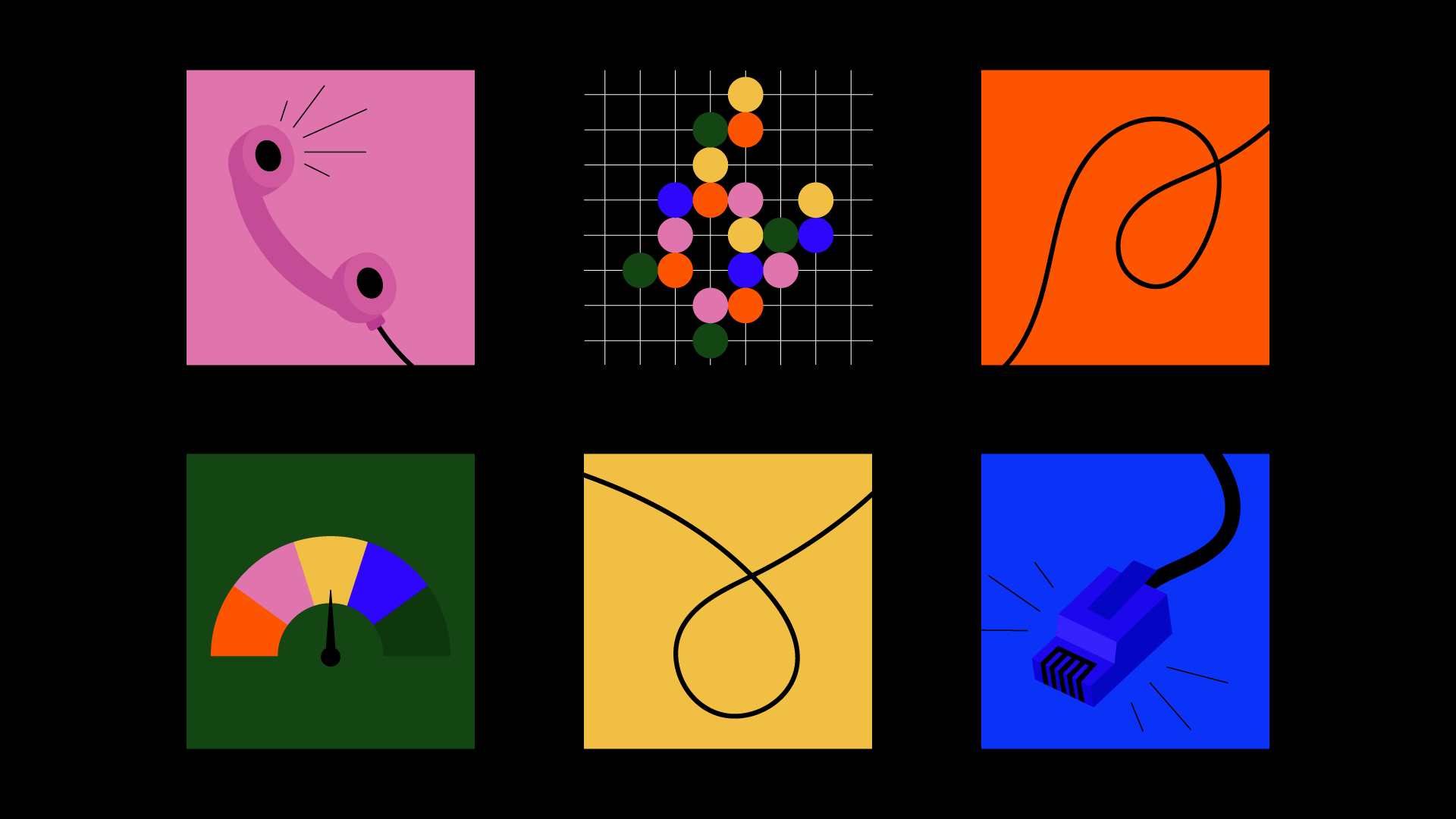 VoIP offers your business many advantages, such as lower monthly bills and greater capabilities for your team to stay in touch with customers and leads. You need to know how much data VoIP uses so you don’t exceed your internet plan.
Since VoIP runs over the internet, it uses your high-speed internet connection to complete calls. While calls made over VoIP don’t use a ton of data, we’ve done the math for you so you can calculate the bandwidth of your VoIP calls.
In this article, we cover all the VoIP essentials, including how much bandwidth you need to get the most out of your internet phone service.

A Primer on Bandwidth & Data Usage

You’re likely familiar with the concept of the speed of your internet connection. The more devices that are connected, generally, the slower things go.
Unlike the speed of your connection, there’s a measurement of how much data you’ve transferred. This is known as bandwidth. All data that travels over your internet connection counts toward your bandwidth.
You might have heard some hubbub about data caps, most often impacting residential broadband connections. These data caps are a measure of the total bandwidth of your connection over a given period, such as a month. The data limits sound quite high but can be quickly be burned through if you’re not careful. Typical limits start at 1024 GB (one terabyte) but can be as low as 150 GB.
If you exceed your allotted data usage, you might be required to pay extra to your internet service provider.
Phone calls made through your commercial phone service, while highly compressed, adds up quickly as your company grows.

How Does VoIP Work?

Voice over Internet Protocol (VoIP) lets you make voice calls over the internet. Instead of using analog signals to send calls to the Public Switched Telephone Network (PSTN), VoIP uses your broadband connection. The underlying technology is known as Session Initiation Protocol (SIP), which establishes a reliable and secure method to communicate with others.
An IP phone works by converting audio into data packets. Those data packets are transmitted over an IP network. Instead of a landline, you plug phones into your existing network.
From your network, data flows through your modem to reach the preferred VoIP provider on the internet. Finally, the VoIP service instantly establishes calls over the PSTN or directly to other trusted VoIP networks.
With a hosted VoIP solution, though, you’ve got more options than just traditional IP phones. Your provider handles the VoIP gateway, so you can use apps (called softphones) to make calls from other devices.
Related: VoIP Basics: The Beginner’s Guide to Mastering VoIP
A typical VoIP setup might look like this diagram: 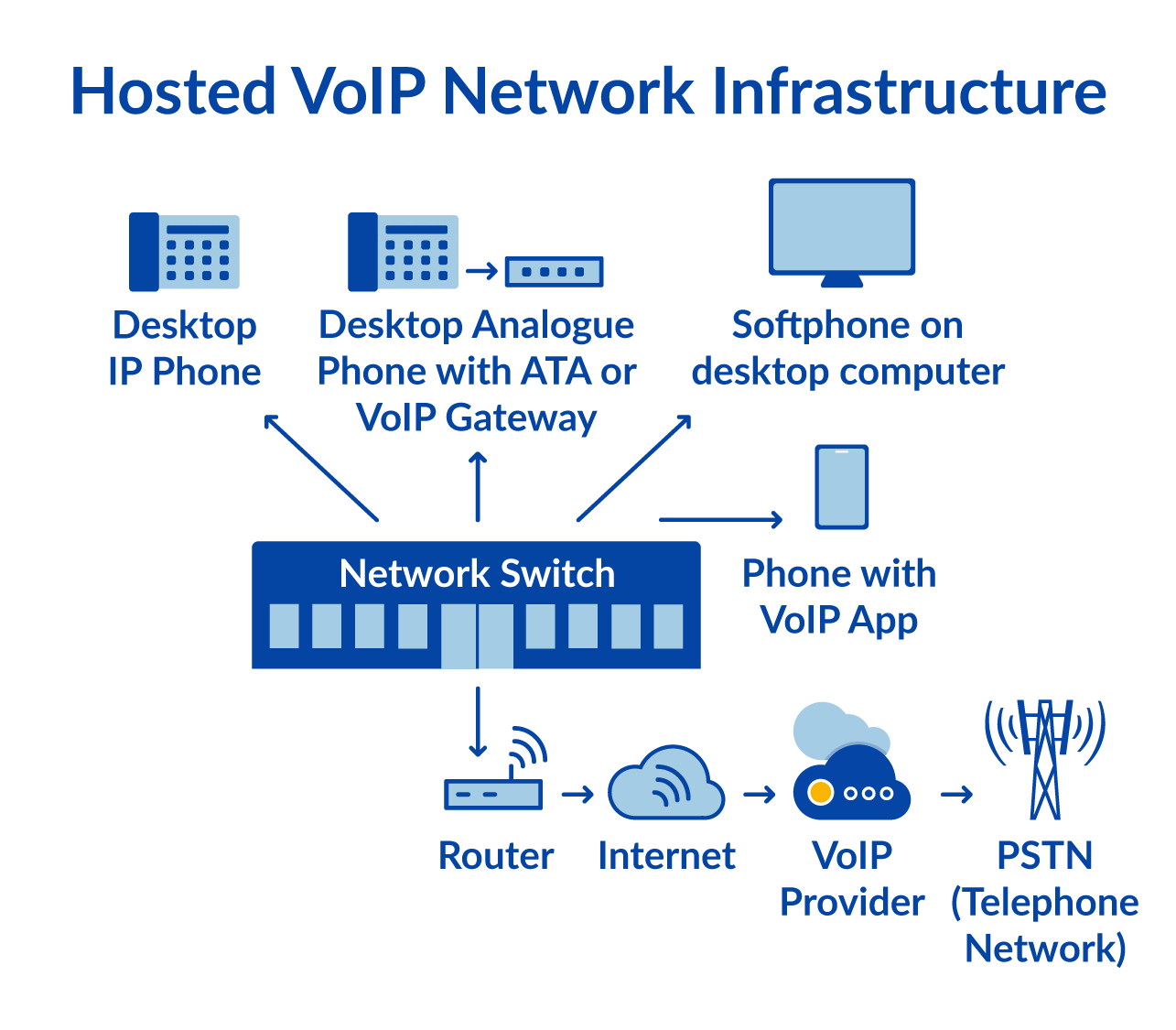 Want to dive deeper? Read our in-depth explainers about how VoIP works and VoIP FAQs.

Does VoIP Work Without an Internet Connection?

No, because it relies on Internet Protocol (IP) to exchange digital data, VoIP does not work without an internet connection.
You need a high-speed broadband connection rated for at least 100 kbps per phone line up and down, which is a breeze for most broadband connections. The larger your company gets, this can become a challenge.

VoIP uses bandwidth when calls are made. In an instant, the IP phone converts your voice into digital data. Much like how music can be made available in an MP3 or AAC format, phone calls are compressed using a variety of codecs. A codec is a portmanteau of Code-Decode, which is a method to compress and uncompress digital data—typically audio and video.
VoIP uses codecs to make phone calls files smaller while maintaining voice quality. There are numerous codecs that exist for telecommunications.
Nextiva uses the G.711 codec to compress and stream phone call data. A modern PSTN phone network also uses the G.711. It uses minimal, lossless compression to digitize analog voice signals at 64 kbps.
Why does any of this matter? The right codec determines how much data VoIP calls consume and affects overall call quality.
The table below shows the bitrate of one side of a call, but also the actual bandwidth usage per second based on the codec.

G.711 uses the most bandwidth, but it has the highest voice quality of the listed codecs since it doesn’t use lossy compression methods.

How Much Data Does VoIP Use?

Since the phone typically continuously streams two-way audio, actual data usage is twice the nominal rate per second.
Below we’ve created a table showing roughly how much data a 10-minute call and one hour of calling would use with the different codecs:

For a modern DSL, cable, or fiber connection, even the G.711 numbers are negligible. So for VoIP calls made from the office, the amount of data is not a real issue, unless it’s a large office or call center.
If your staff members use mobile VoIP for business calls out of the office on their cell phones, it still won’t be an issue with most cellular plans.
However, if your employees work from home, you will want to make sure their broadband connection doesn’t have a low data cap. Let’s say they are on the phone seven hours a day and they work 20 days a month, they could exceed 86 GB of bandwidth.

Is a Standard Data Plan Enough?

For out of office calls, most data plans will be sufficient. For most consumers, mobile data plans will throttle the speed of the connection once they exceed a very high threshold of bandwidth.
A standard mobile plan these days offers more than 3GB of bandwidth, which is almost 10 hours of calling. On average, U.S. consumers on limited plans use just 1.6GB of data per month.
It’s worth noting that if calls made over Wi-Fi don’t count toward your data cap on a cellular plan.
Business plans typically have unlimited data, which, of course, eliminates the issue with data caps. For those who work from home on a residential broadband connection, we recommend reviewing past usage and understanding your limits with your ISP.

How Much Bandwidth Do You Need for VoIP?

For VoIP calls, we recommend at least 100 kbps upload and download bandwidth per line. Don’t be led to believe that a one-megabyte connection is enough for ten VoIP phones.
You need at least a megabyte of available, dedicated bandwidth to be able to handle ten high-quality VoIP calls at the same time. You also need to budget for other activities, like entering leads in your sales CRM, hosting webinars, or streaming music.
Major carriers offer gigabit speeds (1000 Mbps) for business subscribers. For a small business, a single DSL or fiber connection will be plenty sufficient.


For large offices and call centers, you will want to separate the VoIP phones from your main LAN with a separate network switch or a VLAN to optimize your network bandwidth and reduce network congestion.
Related: 10 VoIP Problems: How to Fix Them Forever
Having speed isn’t enough.
You also need a stable, high-quality connection with minimal packet loss and latency.
Latency is the delay between your phone sending data and the receiver getting it. The higher your latency or ping (the time it takes to send data) is, the longer the audio delay becomes.
Packet loss is an issue where an unstable connection drops packets of data from reaching their target. High rates of packet loss can lead to poor audio quality and even unstable calls.
Measure the health of your internet connection by taking a VoIP Speed Test. This test provides you a good readout on the ability to make and receive high-quality phone calls.
If you have latency and jitter issues, you will need to discuss them with your ISP.

How Much Upload Speed Do You Need for VoIP?

To ensure call quality, you need at least 100 kbps per line of stable upload bandwidth.
Remember that many cable and DSL providers have different download and upload speeds. For example, your download bandwidth might be 100 Mbps, but upload may only be 25 Mbps
If your speed test shows insufficient upload speed, reach out to your service provider.

What Is the Best VoIP Provider for Business?

According to U.S. News & World Report, Nextiva provides the best business phone service out of an in-depth comparison between nine top VoIP services nationwide.
Factors to look at include the availability of live customer service, affordability, ease of use, and reliability.
Nextiva’s cloud phone system starts at $20/user monthly and offers unlimited calling in the United States and Canada. It also includes top popular VoIP features like auto attendants, call routing, and free online faxing. Customers include well-known brands you know and love.
For call centers, we offer enterprise-grade VoIP call center solutions. This enables growth-driven companies to scale up their inbound and outbound sales and support teams without costly hardware or messing with obsolete technology.
An inbound and outbound call center campaign powered by VoIP also saves business owners the costs of commercial real estate by allowing employees to work from home.
Related: Call Center Campaigns Proven to Work [Inbound + Outbound]

As the nation’s leader for business VoIP services, people ask us a lot of questions about VoIP. We’ve highlighted and answered the most frequently asked questions below.

Is VoIP Better Than Using Landlines?

As an individual, the only real benefit of switching to VoIP is the potential cost savings on domestic calling. If you operate a business, VoIP brings a lot more benefits to the table.

You can get access to advanced calling features and integrate your phones directly with your CRM, without costly on-premises hardware. You can route calls to employees around the country as if they’re in the same office.

Unlike many landline plans, you typically don’t pay per minute for domestic calls over VoIP. Advances in internet technology allow for extremely low costs to provide reliable phone calls.

With Nextiva, you can get unlimited calling in the United States and Canada with every plan. Read more about what costs of VoIP and find the right plan for your business.

How Do I Convert My Landline Phone to VoIP?

At Nextiva, we provision all VoIP phones for our customers before sending them. That means all you need to do is sign up, choose your phone, receive it, and plug it in to start calling.

You can even use the free Nextiva App on your desktop (and smartphone) without buying a VoIP desk phone.

Making the switch for a large office can be a little more involved. In that case, you should follow our step-by-step guide on setting up VoIP. Regardless, you get all the guidance, recommendations, and support you need with Nextiva at no extra charge.

Can I Keep My Phone Number If I Switch to VoIP?

Yes, you can keep your local or toll-free number when you switch to VoIP through a process known as porting.

Nextiva includes porting with every line of service you need. Communications experts will gracefully transition your phone service in an uninterrupted fashion. Unlike a landline number, VoIP Numbers don’t rely on a physical location. So you can split your customer support calls between multiple offices with one number.

If you want additional business phone numbers, you can get those as well from Nextiva, built into the same monthly price.

How Fast Does My Connection Need to Be for My Office?

Your connection should at least have 100 kbps of upload and download bandwidth per VoIP line. Most modern broadband plans offer more than 100 Mbps of bandwidth (100X more than what you need).

Monitor your past usage and account for growth in headcount and data usage. Employees frequently stream their favorite music, watch YouTube videos, and manage customers using CRM software, so you have to support more data than phone calls.

The data consumed by VoIP isn’t massive, but it is a factor you need to monitor closely due to network congestion, latency, and security.